Skip to main content
Poker has a curious history, and nobody can be certain where the game originated. Many believe the game was the result of inspiration from a number of sources, including Persian, French, German and English games, though it is fairly certain that the first variations were being played around 1830 in New Orleans.

These early variations used a deck of twenty cards, and bets were made according to the value of each player’s hand.

Mississippi Riverboats were popular gambling venues, and the game is reported to have spread via these, particularly during the gold rush across Mississippi and the West.

As soon as the game began to spread, new variations using a full fifty-two card deck were born, such as “Draw” and “Stud” poker, which were invented as early as the American Civil War. Around 1925, the first instances of community card based poker were reported, giving birth to many of the more popular variations still played today. 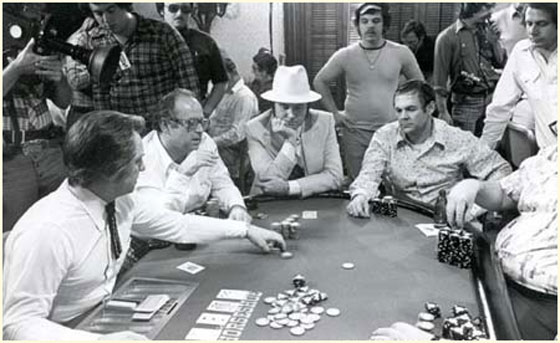 The transition from the US to other continents is largely attributed to the US Military, who took various forms of the game overseas in the following years.

The next major event in the evolution of poker came in 1970, where the World Tournament was introduced. At last, poker players were recognised as professionals in their field. It was around this time that poker guides began appearing on the market, giving your average player an insight into the game strategies used by professionals. This dramatically increased the games popularity and made it much more accessible to those outside of gambling venues.

In recent years, poker has undergone perhaps its biggest change of all. Since the introduction of televised poker, the game has become a spectator sport, and is now enjoyed by thousands every day. Professional poker players are now more widely recognised, and many have even reached celebrity status with the increased television exposure.

It would be difficult to predict what is to become of poker, though it seems certain that the current variations are set to stay for the foreseeable future.