I started playing Texas Hold’em almost a four and a half years ago now.  Like many new players my approach to the game back then was much different than my approach now.  If you are familiar with the “5 levels of thinking” of Texas Hold’em, I used to play with only the first one.  I certainly never considered things like my position at the table, the blinds, my stack, the pot odds, etc.  My plan was to look at my 2 pocket cards and try to guess what I could hit on the flop, the turn, and on the river.

Obviously my playing was very bad back then. In fact, as I think about it now, I realize that my winnings usually were just because I hit a straight, a flush, or something nuts on “Fifth-Street”. In short, many players would say I was winning just because of my luck. If you’ve ever played online poker, especially in low-medium levels, I am sure that you have often been faced with “all in situations” (even in the earliest phases of a tournament or SnG) where the luck prevails over the skill. 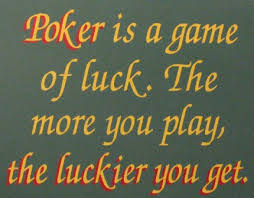 After my first studies to improve my skills in Texas Hold’em, I decided to make a test: I asked 4 of my friends – who usually played online poker – to join the same tournament for one week, and then I would study all of the hand histories. In 57% (16 out of 28) of the tournaments, my friends were eliminated when they went all in when they were the underdog often playing marginal hands with no help on the board. Usually they simply were making the wrong decision.

From this tiny study I developed a problem that I call “the Cowboys’ problem”, and in this article I want make you reflect on it.

Let’s say you’re playing a medium-level tournament online where the top 20 finishers get paid and there are only 25 players left. You have been doing well so far and you currently are 2nd in chips and you and the chip leader are sitting at the same table. You find yourself in a hand with the chip leader but you have not yet had enough time to mark him as “tight”, “aggressive”, “maniac” etc.  Playing on the button position, you get K-K, but the chip leader, who’s acting on the cut-off, goes all in.

I would say that most Texas hold’em players would call this hand instantly BUT passing the cowboys in this situation is surely the right way to play. Why is it important to be able to fold the second best starting hand?  It is because the best way to win at Texas hold’em is by reducing the amount of luck and “fate” that is involved so you can let your skills prevail over your opponent’s.

When you start to play Texas Hold’em using this kind of thinking it will help you reduce the “luck factor” in the game.  Once you are able to do that then improving your skills by reading and studying this game, will make you a better poker player.